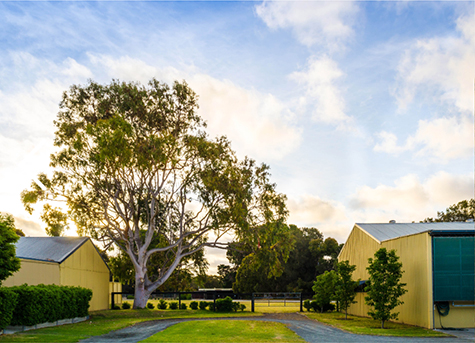 In a business that experiences so many ups and downs, could it be that the thoroughbred industry is better placed than most to weather the current coronavirus crisis?

That interesting contention is posed by Mill Park principal Chris Watson as he considers the response the broader industry has made to the economic and social upheaval caused by the virtual shutdown of society over recent weeks as the world seeks to contain the spread of COVID-19.

A crisis of this nature has not been experienced for a century and has left many industries reeling. The thoroughbred industry too has been hit with a hammer blow, but Watson told TDN AusNZ that he believed the character-building nature of day-to-day business of the thoroughbred game will put those involved in good stead to weather the storm and make the changes needed to press on.

“Our industry is so resilient and people are so used to the trials and tribulations that occur. We are used to rejigging and changing our approach to the situation very quickly,” he said.

He sees the upcoming Inglis Australian Easter Yearling Sale, which will be held as a ‘virtual’ sale after coronavirus protocols prevented a traditional live auction, as an example.

“I think with the circumstances of this virus and the way we have had to sell these horses, we have had to have that ability. Everybody has shown they can change on the move very quickly and ensure the process continues,” he said.

“Our industry is so resilient… Everybody has shown they can change on the move very quickly and ensure the process continue.” – Chris Watson

Certainly Watson is living that mantra in his day-to-day work at Mill Park at the moment. Confined to his South Australian home by strict border controls put in place by the state government, he has been getting the job done over the phone as his draft of four is readied for the Easter Sale from Sledmere Stud in the Hunter Valley.

“We are pretty much in lockdown here and it’s only Victoria and New South Wales that don’t have interstate travel restrictions. If I was to go outside the state, I’d have to quarantine for two weeks,” he said.

“I’m trusting implicitly the guys up there at Sledmere to show our horses to the best of their ability. I’m much better use being on the phone and chatting to perspective buyers and our clients as well. That’s something I can do from home and still get the same end result.”

Watson had initially intended on sending his draft to the Riverside Stables at Warwick Farm but when it became clear that the Easter Sale wouldn’t proceed as it usually would and that inspections were instead being conducted in the Hunter Valley, he had to redirect them.

Mill Park has an excellent relationship with Sledmere Stud at Scone, and Watson arranged with Royston and Catriona Murphy to host his four yearlings for parades ahead of the Sale.

Mill Park’s draft has been in hot demand as its reputation for producing stakes-winners continues to grow.

G1 Victoria Derby winner Warning (Declaration Of War {USA}) and R.Listed Magic Millions 2YO Classic winner and G1 Golden Slipper S. runner-up Away Game (Snitzel) are among their successful graduates of recent times, while Mill Park was the leading vendor by average at this sale 12 months’ ago.

Watson hopes that reputation will give them some buffer against the expected headwinds in the market.

“You’ve got buyers that have consistently bought off you over the years and have had great results,” he said.

“The track record we have of producing stakes winners from relatively small numbers, it will certainly encourage people, regardless of the circumstances, to keep coming back. They know when they come to us at Mill Park, they will be able to source quality and most people are willing to pay the right amount of money for that product.”

Quality product is certainly what Mill Park bring to the market at Easter this year with three yearlings by Yarraman Park’s star stallion I Am Invincible as well as a colt by Newgate’s first-season sire Capitalist who is a three-quarter brother to a Group 1 winner.

Lot 83 is a filly by I Am Invincible out of Molto Bene (Royal Academy {USA}), who won a G3 SA Sires’ Produce S. and is a half-sister to Group 1 winner Mourinho (Oratorio {Ire}) and Listed winner Classic Weiwei (Shamus Award).

“She’s a pretty typical I Am Invincible filly, more in the classic mould. I think she is going to be a sprinter-miler. She has a lovely bit of quality to her, plenty of size and scope and great length of leg to her. She moves beautifully. She should be well received,” Watson said.

The other I Am Invincible filly, Lot 490, is also by a stakes-winning mare, Hussy By Choice (Hussonet {USA}) and is a sister to the three-time winner Zac Attack as well as an as-yet unnamed Not A Single Doubt 2-year-old filly who fetched $725,000 at last year’s Magic Millions Gold Coast Yearling Sale.

Hussy By Choice is out of Little Flower (Redoute’s Choice), who is a half-sister to Group 1 winning pair Maid Of Heaven (Smart Missile) and Castelvecchio (Dundeel {NZ}).

“This mare has been fantastic for us. She continues to produce beautiful types. This is her third foal, and again, she is another gorgeous looking horse. Her results in the sales ring have proven how nice her progeny are,” Watson said.

“We are getting great reports on her as well. She’s a bit more forward, is very strong with great bone and is a good-looking style of horse.”

The I Am Invincible colt, Lot 308, is out of Listed winner Affable (Husson {Arg}), who has produced one winner from one to the track.

“He’s out of a really nice family, going back to horses like Turffontein. Again, he is from a stakes-winning mare who was super fast. He’s got a lovely bit of quality to him and I’m sure will be well-received. He will furnish into a really lovely horse,” he said.

Lot 111 is probably the highlight of the draft, being by a Golden Slipper S. winner in Capitalist, out of Noondie (Flying Spur), who has already produced a winner of the G1 Oakleigh Plate in Booker (Written Tycoon) as well as her stakes-winning brother Banquo, who was recently placed in a Group 2 race at Caulfield.

“This has been one of the great colts that we have had on the farm all the way through. He’s just had that great bit of quality to him and with Banquo coming along and updating the pedigree as well, that has been great too,” he said.

“He’s probably more in the mould of Booker. He’s got a fantastic hindquarter and gaskin to him. He’s a little more compact and he looks like he will go early.” – Chris Watson

“He’s probably more in the mould of Booker. He’s got a fantastic hindquarter and gaskin to him. He’s a little more compact and he looks like he will go early and I’m sure he will be well received. He’s a really good-looking colt.”

Knowing what to expect in the market is next to impossible, but Watson said his horses were there to sell and would have fair reserves.

“We’ve been through the process with our partners and owners ahead of this sale and have had a few withdrawals. That unknown factor has affected a few of our clients and they have been not wanting to risk it. They have withdrawn them and opted to race them themselves,” he said.

“The ones we have continued with, they are there for sale, but our clients value their horses very well and won’t be giving them away. They will be realistic with their reserves,” he said.