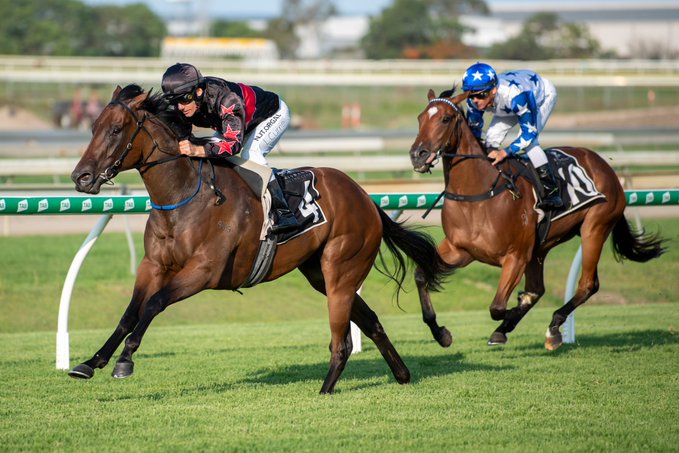 The team of trainers Ciaron Maher and David Eustace and jockey Luke Currie came away with both of the two two-year-old feature races at Doomben on Wednesday.

After the $750,000 Fastnet Rock colt Rathlin raced his way into the Magic Millions 2yo Classic with a three length win in the (RL) Listed Spirit Of Boom Phelan Ready Stakes it was the turn of the $425,000 Snitzel filly Away Game to reserve her place in the $2 million feature at the Gold Coast on January 11 with a dominant performance in the Boomer Bloodstock Calaway Gal Stakes.

A luckless fourth in the Listed Merson Cooper Stakes at Sandown at her career debut, Away Game was sent off favourite and didn’t disappoint. Given a positive ride by Currie the daughter of Snitzel raced on the outside of the leader Hamilton Hill and when Currie pressed the button in the straight he found an immediate response. Away Game was untroubled to win by two and a quarter lengths from the first starter Smart ‘N’ Sexy (Smart Missile) with Miss Lot Won (Sidereus) the same distance back in third.

Stable representative Annabel Neasham said the highflying stable may have as many as four or five starters in the 2yo Classic.

“We were very fortunate to have a lot of support at the sales last year and I think that was our seventh individual two-year-old winner this season,” Neasham said.

A $425,000 purchase by Kerri Radcliffe Bloodstock out of the Mill Park draft at the 2019 Gold Coast Yearling Sale, Away Game is a sister to the talented Modern Wonder the winner of the 2016 SAJC Dequetteville Stakes and was placed in the Group III MVRC Typhoon Tracy Stakes and Group III MRC Thoroughbred Club Stakes.

They are two of the five winners from as many to race out of the stakes-placed Elusive Quality (USA) mare Elusive Wonder who is a half-sister to the Listed BRC McDougall Stakes winner Tantra (Royal Academy) as well as to the dam of Listed winner Oak Park (More Than Ready) from the family of Group 1 ATC Randwick Guineas winner Inference (So You Think).

The win of Away Game will be welcomed at Segenhoe Stud who will offer a three-quarter sister by Not A Single Doubt at the upcoming Gold Coast Magic Millions Yearling Sale.

Elusive Wonder foaled her eighth consecutive filly on October 12, a daughter of the champion Merchant Navy.