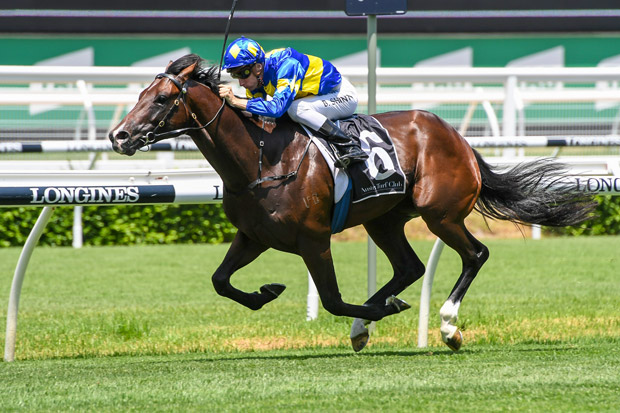 There’s no doubt in co-trainer Adrian Bott’s mind that there’s a major win in Dawn Passage and doesn’t mind going into Saturday’s $200,000 Inglis Guineas (1400m) at Rosehill as the underdog knowing he’s the best credentialled three-year-old.

The last start Hawkesbury Guineas winner, who has the scalp of Bivouac from his debut win, has taken on the elite sprinters of his generation all season and Bott says the best is yet to come.

“His placement throughout his career is an indication of the opinion we’ve always had of him,’’ Bott said.

“He’s needed things to go his way and he hasn’t got it at times so his record could read a bit better than it does.

“If he gets a nice firm surface he can run right up to that performance from last start.’’

Dawn Passage sits on the second line of the TAB market at $3, as at Friday morning, with Masked Crusader $1.85 on the back of his easy win against older horses last week.

The Inglis Guineas is an important race for Dawn Passage as Bott hopes to squeeze his way into next month’s Group 1 Stradbroke Handicap (1400m) in Brisbane and to do that a win is paramount to boost his rating.

The colt showed the turn of foot he can produce on a good track as he put the Hawkesbury Guineas away early by running 11.15 between the 400m and 200m (Punter’s Intelligence).

“He’s done well since his win, he’s coming off a dominant win in Group 3 company and couldn’t have been more impressive,’’ he said.

“He’s maturing now and strengthening and improving all the time. He’s entered for the Stradbroke and Saturday’s performance will tell us everything as to whether we continue to pursue it.’’

Bott said races in the spring like the Group 1 Epsom Handicap (1600m) and the Golden Eagle are likely targets, especially if he lives up to expectation in his next two starts.

“I could see him stretching to a mile and a handicap is probably more his go at this point,’’ he said.

“It’d be great to land a big race for him, with Aquis involved he’s a commercial horse.’’

While all the focus has been on Dawn Passage, Masked Crusader and John O’Shea’s filly Rocha Clock, front running gelding Bandersnatch has become the forgotten horse of the Guineas.