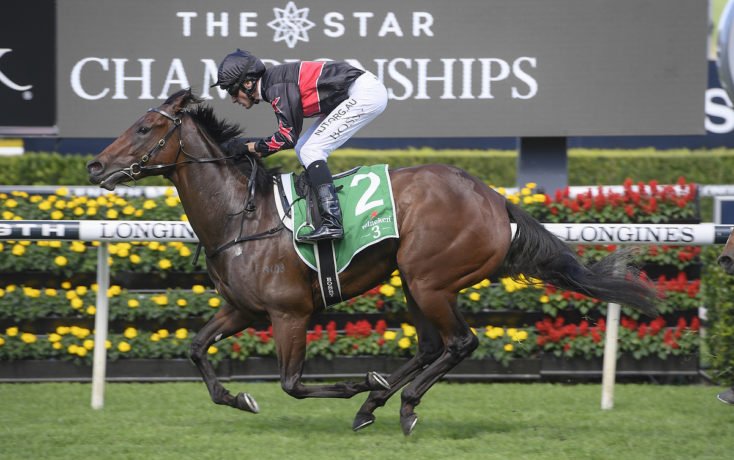 If the Mill Park Raised, Magic Millions winner Away Game is not the best two-year-old in training, she can lay claim to being the toughest.

Since making her debut in November, the filly has raced in three states winning the Magic Millions Classic at the Gold Coast, finishing fourth in the Blue Diamond Stakes in Melbourne and runner-up in the Golden Slipper.

Glen Boss has ridden the Ciaron Maher and David Eustace-trained filly at her past two starts and says she deserves to be crowned champion juvenile despite not winning a Group One.

“I’m confident she just put her hand up for two-year-old of the year just there,” Boss said.

“She has just done an incredible job.

“I said to Ciaron when I rode her on Tuesday that you just loving being on her back because she has so much enthusiasm and life.

“She’s a good filly to be on and her record is second to none now so I dare say she will get a lot of votes for two-year-old of the year.”

Annabel Neasham, who runs the Sydney arm of the Maher and Eustace operation, is in awe of Away Game’s fortitude and ability to cope with whatever is thrown at her.

“She has been unbelievable. I think she has run every month since November,” Neasham said.

“We were pretty confident she was coming in today as good as she was for the Slipper but there was a bit of a query on whether she’d handle the track.

"She's just so tough"@annabelneasham on filly Away Game after winning the Percy Sykes #TheChampionships pic.twitter.com/TccJuPs7Jx

Away Game trailed the speed, pushing out into the clear and quickly asserting her authority to put the race in the bag.

Neasham revealed the filly was sent for a spell after the Slipper but did so well she was put back into work.

“We put her in the paddock for a week out at (retired trainer) Peter Nestor’s and he just kept ringing me saying she needs to come back in, she is flying,” Neasham said

“She is just a bonny filly and loves being in work and I can’t wait until she turns into a three-year-old.”