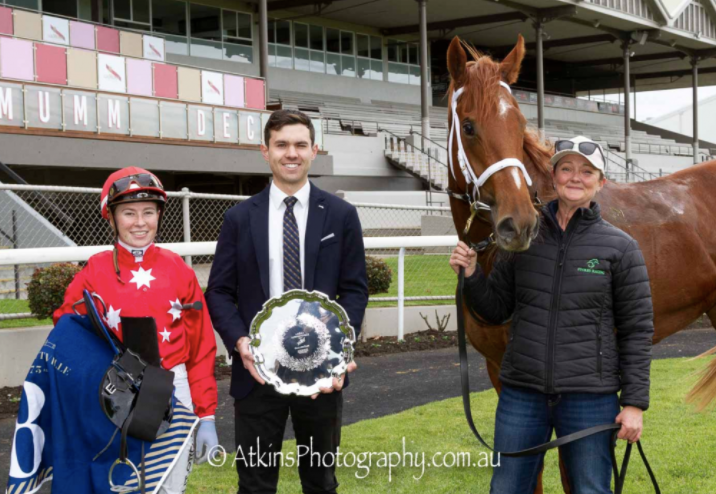 There is both aptness & irony in the name of Not A Single Doubt’s 72nd stakeswinner, Instant Celebrity who won Saturday’s $100,000 SAJC Oaklands Plate 1400m LR.

The 2YO filly has perfectly fulfilled the promise of her name by winning her first start and then a month later, achieving stakes-winning status for her owner-breeders Trevor & Beth Robertson and trainer Phillip Stokes.

A 3YO campaign aimed at the Thousand Guineas G1 is now on the cards for the daughter of dual Listed winner Celebrity Girl (by former Arrowfield stallion Starcraft, now at Rosemont Stud in Victoria).

“She was always an attractive type to the eye from day one and being by Not A Single Doubt, she was a filly we all agreed would be one to keep and race. We could not be happier for Trevor and Beth. A well deserved stakes win!”

Not A Single Doubt’s rise to fame has been anything but instant. He stood his first six seasons at a fee of $12,500 +GST; first hit a six-figure yearling average with his 7th crop; posted his first stakeswinner, Doubtful Jack, 708 days into his career; and didn’t make the top 10 on the Australian General Sires’ Premiership until his oldest runners were eight year-olds.

Now he’s one of Australia’s most effective and most admired stallions, with enviable lifetime statistics: 7.8% Stakeswinners/Runners, 14 Group 1 winners, 27 2YO stakeswinners, $128,000 Earnings/Runner and he’s been a top 10 sire in Australia every season since 2015.

Retired from stud duties earlier this year, Not A Single Doubt offers a persuasive cautionary tale against the premature judgment of any stallion – especially if he’s a highly rated juvenile in a superlative crop, by a great Champion sire, from a potent female family and backed by a major farm.