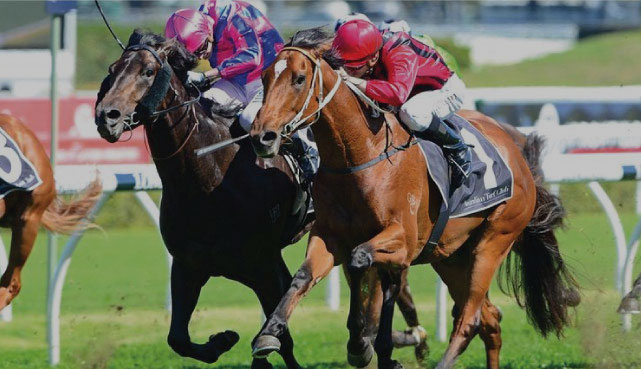 The pair were well back on the turn with Gem Song on the outside of Mickey Blue Eyes. With a six kilogram pull in the weights, Mickey Blue Eyes edged out Gem Song (Your Song) by a short-half-head with Purple Sector (Pins) two and a half lengths back in third.

A good-looking son of Medaglia d’Oro (USA) Mickey Blue Eyes advanced his record to 2 wins and a second from 5 starts with earnings of $132,780.

Trained by David & Ben Hayes & Tom Dabernig, Mickey Blue Eyes was coming off a win over Black Caviar’s son Prince Of Caviar in a 1300 metre maiden at Bendigo.

He has form around Tarka and Graf in his first preparation. He had a spell and furnished into a lovely horse,” Bayliss said.

“I like the way he pinned his ears back and really knuckled down that last furlong.

“He’s pulled up like he hasn’t had a race he is that happy. If he comes out of the race well he has plenty of improvement in him and he is an exciting horse.

Co-trainer David Hayes said the Champion Stakes was likely to be his next start.

“I think he would have been unlucky to lose. He just got held up at a vital stage.

“I would say we will run him in the Champion Stakes, a Group 1 over 2000 metres. Bred by Harry Perks, Mickey Blue Eyes (pictured as a yearling) was purchased by Peter Devitt for $350,000 out of the Mill Park draft at the 2017 Magic Millions Gold Coast Yearling Sale.

He is the second foal and second winner out of the winning Zabeel mare Carolina Bella who is a daughter of the stakes-winner and multiple Group placed Centaine mare Wyndam Special.

A $330,000 yearling, Carolina Bella was purchased for $60,000 by Hancock Quality Bloodstock at the 2014 Magic Millions National Broodmare Sale.

She has a 2yo filly by Hallowed Crown and a yearling colt by Shooting To Win. She was covered by Pierro last spring but missed.