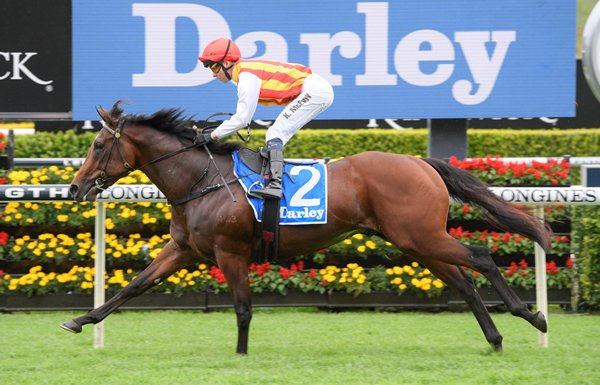 The hype around three-year-olds whose stud careers have already been sewn up may have Eskimo Prince Stakes (Gr 3, 1200m) contender Peltzer (So You Think) flying under the radar, but Gerald Ryan wants to wait and see what his promising colt delivers on raceday before declaring him a stallion-in-waiting.

Peltzer was considered one of Sydney’s most promising three-year-olds last spring, locking horns with contemporaries Ole Kirk (Written Tycoon), Anders (Not A Single Doubt), King’s Legacy (Redoute’s Choice) and North Pacific (Brazen Beau), all of whom are assured of a place at stud.

A son of versatile Coolmore stallion So You Think (High Chaparral), Peltzer closed out his last campaign with victories in the Stan Fox Stakes (Gr 2, 1500m) and the $1 million Bondi Stakes (1600m) (footage), but it is this autumn where he will get the chance to stamp his own stud credentials.

Peltzer was fitted up for his 2021 return with a quiet barrier trial at Rosehill on January 15, finishing fourth over 900 metres. He won his last hit-out at his home course, coming a length clear over 1030 metres on January 27.

“He’s never been a great trial horse but he enjoyed his work last week. He lobbed there, travelled well, he quickened and he relaxed and he’s done well since,” Ryan, who trains Peltzer in partnership with Sterling Alexiou, told ANZ Bloodstock News yesterday.

“I will tell you after Saturday if he has improved as you can’t tell at home. I know he looks well, he is working well and he’s got weight on him, that’s all I can say. The rest you will find out on raceday.”

Peltzer could again clash with the Hawkes Racing-trained stablemates, Golden Rose Stakes (Gr 1, 1400m) winner Ole Kirk and runner-up North Pacific, as well as Global Quest (More Than Ready), who finished behind him in the Sydney three-year-old feature on September 26.

Ryan yesterday did point to a potential key factor in Peltzer’s Eskimo Prince chances, citing the fact that the race is being run at Randwick this year after previously being held at Warwick Farm.

“Interestingly, he’s had four runs at Randwick for four wins and he’s had three runs at Rosehill for a third, fourth and fifth, so he might be a better Randwick horse,” he said.

“At this stage, he will run in the Eskimo Prince, the Hobartville (at Rosehill) and the Randwick Guineas and we will decide after that if he pushes further (to the Rosehill Guineas) or sticks to the 1600-metre journeys.”